This is a post I originally wrote when working at Latitude back in 2013.  They’ve refreshed their website since then, so it’s no longer available.  I was reminded of it by Paul Stevens this week, and thought it would be worth revisiting, as it is probably still as valid now as it was 5 years ago.

At Latitude there’s a monthly blog popularity contest.  The writer of the most read post gets £50.  I’ve won this a few times in the past, sometimes because my posts have been pretty good or timely, sometimes through pure luck.

This month I won again, although I really didn’t deserve to.

The post that won was about the way Google is changing and SEO is changing with it.  Fun.  It’s not by best work, but at first glance, it looks like the world loved it – here’s the traffic to the Latitude Blog this year:

On an average day, the blog gets around 50-100 page views.  For a brief period at the end of April, it got thousands.  Most of them were for my post: 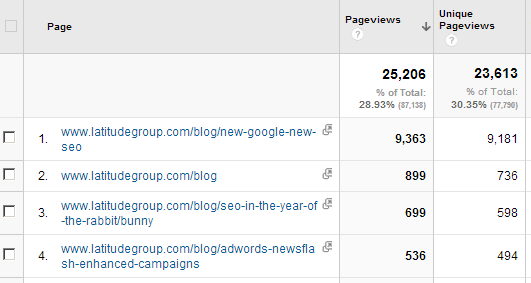 Fact: post #3 was mine too – it’s a picture of a rabbit that I included in a “this year in SEO” post that I was so late in publishing that it came out at Chinese New year.  For a while, this picture ranked #1 in Google image search for “bunny”: 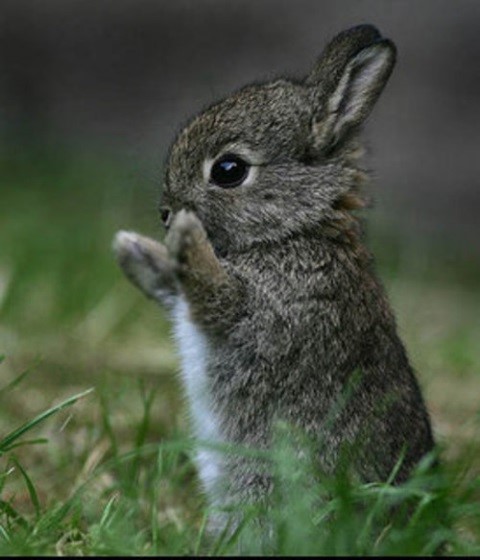 Here’s how I did it:

It was that simple.  Of course, with the promise of £50 for winning, I went a bit crazy, and spent another $1 getting 25 “genuine re-tweets” to make things look a bit more realistic – after all, you can’t be popular without some Twitter action: 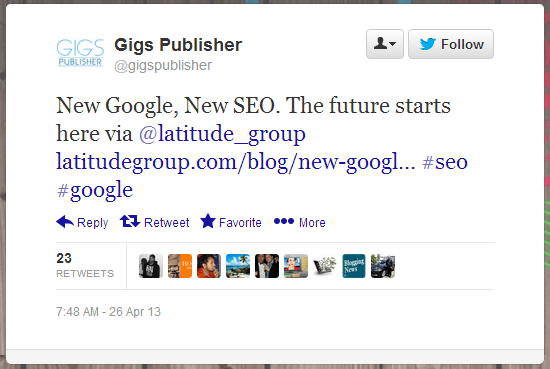 And that was pretty much it.

So I won £50.  As I write this confession, the voucher is already in an envelope making its way to my desk.  End of story?  No.

I didn’t actually spend $2 to win the competition (and I’m not going to accept the prize).  I actually wanted to see how easy it was to:

The answer to “b”: Fairly easy.

Let’s be honest, the vast majority of the 9,363 people who visited my page were not even people.  They were bots with faked referrer data, and spoofed user agents.  At a glance they look “real” to Google Analytics because they’re designed to, but on closer inspection, the cracks start to show. Let’s take a look at the source of the visits:

I’m also wildly disappointed that despite the enormous amount of cash I invested in twitter, I got precisely no visits.  That’s a bitter pill to swallow.

Behaviourally, these visits stand out too.  Check out the highlighted columns:

They’re all very similar.  Compare this to genuine traffic for another post: 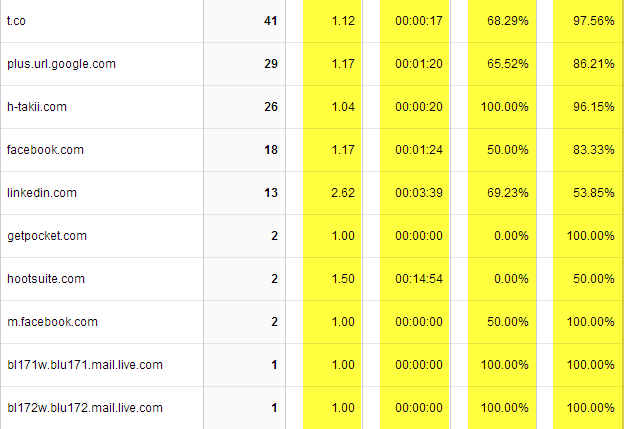 It doesn’t take a genius to see that these visitors don’t all behave in exactly the same way.  The bounce rates are much higher, session length varies considerably by source, and also the percentage of new visitors differs quite a bit.  Somewhat frustratingly, this post got some traffic from twitter too.

When you dig into the traffic and compare from page to page, it’s reasonably easy to see that the behaviour is a bit odd, but from a top level perspective, it’s not that easy to spot – here’s a graph showing the % of new visitors to the Latitude website throughout April – the days where all the fake traffic arrived are highlighted, but overall there’s nothing to say that things are out of the ordinary.

Of course, if this was a retail site, this type of fake traffic would be more obvious because bots don’t buy anything.

There’s a lesson in here somewhere…

Firstly, it’s super simple to buy traffic.  It’s just as simple as buying Twitter followers or Facebook likes – and let’s be honest, there are people queuing up to sell those.

In most cases, that traffic’s pretty useless.  Bots aren’t going to buy anything from you, and those fake re-tweets didn’t actually deliver any visits.  If it hadn’t been for the £50 I “won” from the blog competition, there would have been no benefits – or would there?

These days, “link building” would be a dirty word if it wasn’t a phrase.  A lot of SEOs are doing two things at the moment:

The key syllable in those two points is “reach”.  The value of content is in how many people see it and interact with it.  Just as newspapers have historically sold advertising based on their influence and readership, content publishers derive value from the size of their audiences.  The larger the audience, the higher the value of a page, and the more that a blogger can charge for their “influence”.

For $2 I pretended that the Latitude blog was around 50 times more popular than it actually was.  Based on the almost 10,000 visitors I bought for $1, I could fake a quarter of a million visits each month for less than $30.

That’s going to look pretty sexy and influential, and mean that I can sell my “influence” for a lot more than I might otherwise be able to.

Pretty much anything can be faked, and to a certain extent, it’s a case of buyer beware.  Whether call what you’re doing SEO, inbound marketing, or online PR, if you’re buying influence, the important thing is to be critical.  The sad truth is that If you’re not sure about whether someone is telling the truth, they’re probably not.