As someone who uses Facebook’s data as the basis for targeting advertising campaigns, I’ve found the Cambridge Analytica story quite interesting.

However, what I can’t get my head around is the numbers that are being thrown around.

Particularly the “up to 50 million” number that keeps appearing.

The backstory, in case you’ve been living under a rock:

Aleksandr Kogan, an academic at Cambridge University built a Facebook App called thisisyourdigitallife and paid about a quarter of a million people to download it as part of a study.  The App was given access to users’ Facebook profile information including their friend lists and then created a profile of them which they could presumably “enjoy” and gain astonishing insights into themselves from.

The data captured from this app was then allegedly packaged up against Facebook’s terms & conditions, and sold on to a couple of third parties.  Again, riveting stuff.

So, how does a quarter of a million people become …

Apparently because of maths.

On average, a typical Facebook user has 185 friends on the platform

I’ve just checked, and at the time of writing I have 350 friends on Facebook.  TBH, I’m a little surprised at that number, and I suspect if I looked through the list in any detail, I’d spend a lot of time saying “who?”.  But, the fact is, I’m more popular than average.  Wow.

Anyway, the point is, I’ve accumulated this carefully selected group of people over many years of not being too much of a dick, and by having various groups that I orbit around – colleagues from various jobs, school, college, university, occasional visits to the pub, and a few shared interests.   There’s a bit of overlap in some cases – people I went to school with who subsequently worked in the same places from time to time, and other things, like geography.  If I were inclined, I could group people into some kind of Venn based on how I came to know them.  I won’t, because I don’t like to quantify people, but it would look like this: 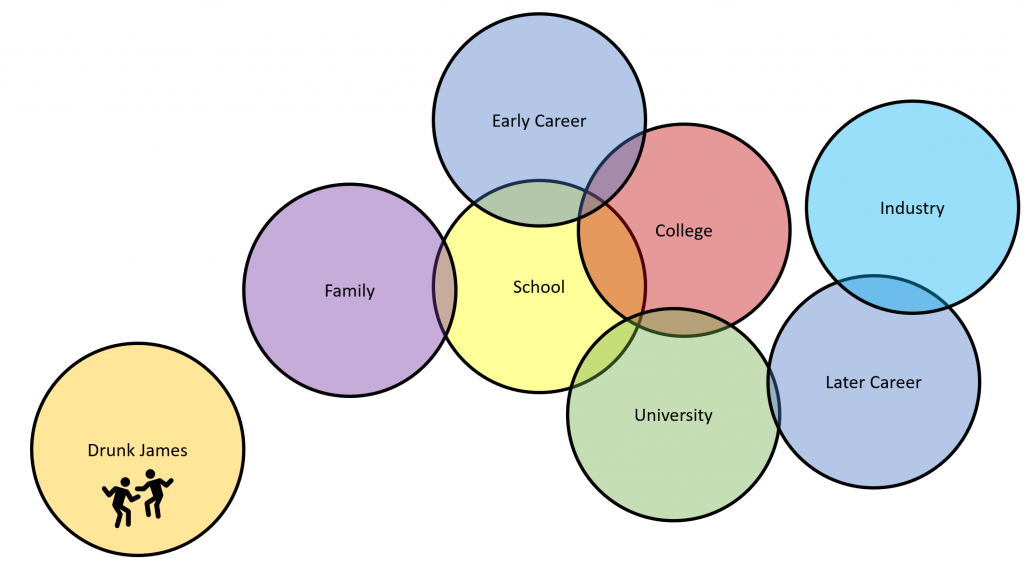 So far, so self analytical.

Going back to the 46,250,000 number, the nature of a social network is that it’s a network.  While I have friends across multiple groups, many of the people within those groups are in fact friends with each other.

Facebook is the ultimate game of Kevin Bacon. The idea that each of the quarter of a million people who played thisisyourdigitallife was a complete island with 185 (or so) unique friends is, in the words of Stephen Murphy (92 Mutual Friends). A bunch of tug.

It would be hugely impressive if Aleksandr Kogan and his team had been able to get 50 million unique people from their seed list of ~250K individuals, but in the real world, they almost certainly didn’t.

Don’t get me wrong, the number of people’s data that they did get and allegedly used to perpetrate some evil schemes was probably in the millions if not tens of millions, but I’d be surprised if it was even half of the 50 million that’s been mooted.

The news papers have caveated their stories with a careful “up to” here and there which lets them off a bit, but hey, I could say that a certain part of my anatomy was up to 12 inches long, and I wouldn’t be lying, but I’d still be setting people up for disappointment somewhere down the line.  Fact is, there’s been a lot of lazy journalism about this, and while the story is shocking, it’s almost certainly not 50 million shocking.

I’m not going to get into the politics of Cambridge Analytica, or Tump, or Brexit, because frankly, all of those things are best written about by people who like arguing in pubs.

But what I think is worth noting is hypocrisy.  Particularly the kind of hypocrisy of news outlets who are breathlessly calling out “fake news” and bleating about a big data conspiracy to propagandise a population via profiling, when they haven’t properly fact checked their articles and interrogated the data in a meaningful way.