I’m not usually one for life changing New Year resolutions.  There are a few reasons for this, but the overriding one is that I can’t be bothered with them.  I’m not immune to self-improvement, but the whole concept of “it’s this year, so I’ll change that” doesn’t really appeal.

That said, last year I set myself a personal goal:  I’d run a million metres.

Easy enough on paper – it’s just about 2.75KM each day; and despite my advancing years and physical appearance to the contrary, I’m reasonably fit: If I need a bit of peace on a Sunday I can get through 10 miles without dying more than once or twice.

Over a full year it’s not an impossible distance, and compared to proper athletes, it’s not even that far, but given that my average pace is about 10KM/Hr, it was an active commitment of about 100 hours.  Add in getting changed, showered, and what not, this kind of target is probably a commitment of about 150 hours – or about the amount of time I’d spend in the office in an average month.  Coincidentally, It’s probably about the same as an agency might spend on a fairly low cost SEO campaign.

Challenges Along The Way

1,000KM or 150 hours seems reasonable when you’ve got 365 days to fit it in, however pretty quickly you realise that there’s going to be things getting in the way.

Most stuff you can work around.  Work for example.  A trip to the gym in the morning and boom 5KM on the treadmill in 30 minutes.  Away for the weekend?  Easy – there are few better ways to see a place than jogging through the streets before the day gets going.

And then there are the things you can’t plan for.  Kind of.

I may have mentioned that I’m a bit, well, girthy.  At the start of the year I was probably carrying a couple of stone more than a man of my height should.  Being fat generously upholstered means you have to work harder, but it also means that you put extra impact on your feet.  I have a tendency to pick up foot injuries when I run a lot.  At the start of the year, I expected to lose a few weeks here and there to injury, and my fragile body did what I expected.  I lost about 5 weeks in the spring to tendonitis in my right foot, and 3 weeks in the late summer when my left foot decided that it was being ignored.

Tip:  a lot of foot injuries are caused by how you lace up your trainers.  Make sure they fit correctly and are fitted correctly.

When you lose big chunks of available time, you need to compensate by taking longer later.  This has an impact on how much time you need to set aside each week which can have a knock on to the amount of running you’re able to do.

Thankfully, my wife was more supportive than my Nikes, so finding the time wasn’t a problem.  In fact, she probably forced out a few runs when I couldn’t really be bothered.

The best piece of advice I was given (aside from “don’t”) was to keep a diary.  That suited me, and I built a lovely Excel spreadsheet with plenty of vLookups and Charts to keen an eye on how I was doing.

As an aside, I was really pleased with the fact I kept the diary at all.  I used Office365 and saved the spreadsheet online, so I could update my record via my phone and keep track of numbers wherever I was.  It was really handy.

I wouldn’t be blogging about it if I’d failed miserably.  Of course I did it.  Here’s how I progressed over the course of the year: 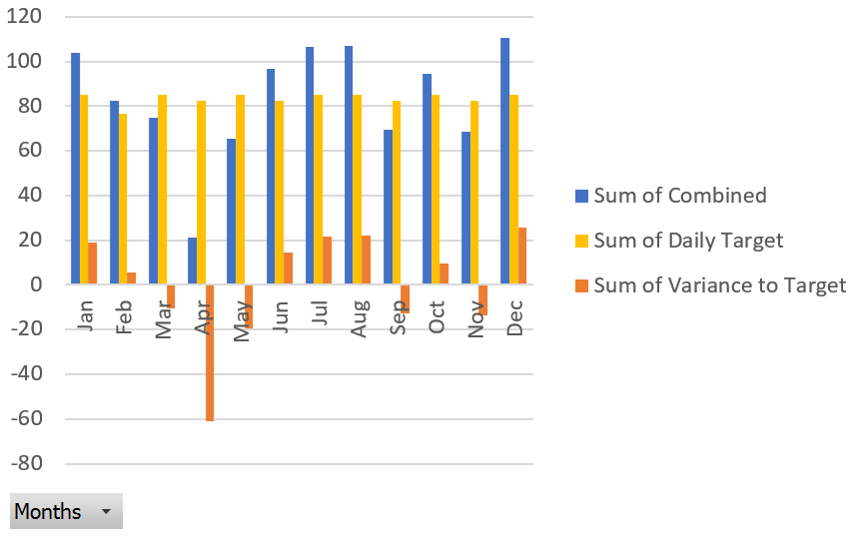 I hit my target in 7/12 months, which I’m pretty happy with, but it’s clear that April was a bad month – that’s when I had the foot injury.  Oddly I hit target in August when I had the second flare up, but that came at the end of the month, and with it being summer, I’d put in quite a few miles in the first couple of weeks and given myself a cushion.

December was a real struggle – worse than it looks above – I didn’t really want to spend Christmas knocking out the miles when I’d rather be knocking back pints.  I did just over 110KM in the month, but my last run was on Christmas Eve, so I had a week off at the end.

What Did I learn?

There’s a few things I could write about the personal benefits like improved discipline, or being better at tracking things, but ultimately, discipline is something that I should damn well have got on top of at my age.  Also, measuring things is kind of my day job.  It’s not like I learned any new Excel formulae from keeping a diary.

What I did learn was more tangential to the actual activity.  I’d set a goal which was demonstrably achievable, and I put in place a plan to reach it; I also gave myself the time and equipment that was required.  At no point did I think that the goal was unrealistic, but it became an end in itself.  Rather than looking at the benefits that it should have brought (increased fitness, contributing to weight loss, or just getting more fresh air), I became very focused on just hitting the miles.  That probably wasn’t healthy.

There’s a parallel between this and other goals that get set.

Ultimately, the target I set was arbitrary.  It was probably a jump up from what I covered in 2016, but because I was measuring differently, I can’t be certain of the exact increase.  Also, while there may have been an associated objective (get a bit fitter), this eventually became secondary to the metric that was being measured.  Distance became the rigid target and while I achieved it in the end, it was something of a hollow victory.  My running gear needs to be encased in concrete and buried at sea, and if I’ve lost any weight, it would be measurable in picograms.

Over my career, I’ve been introduced to a system called OKR (thanks Alex & Richard), whereby there’s an overriding Objective in place which is supported by more measurable Key Results.  If I’d designed my 2017 goal like this it would have probably been: