Depending on your viewpoint, at the time of writing this, we’re either 3 hours into a brave new world of national self-determination, or on the brink of a disaster, and if I were to base my entire world viewpoint on my Facebook feed, I’d assume it was the latter.

I had a quick scan through my newsfeed before writing this post, and it didn’t make pretty reading.  Here’s a sample:

There’s palpable shock.  To an extent, that’s understandable.  As Dimbleby (and pretty much every politician getting interviewed on the rolling news said:

This is huge: the UK has just democratically decided to leave a major international trading bloc and go it alone.   the prime minister has resigned and the markets are incredibly volatile.  The whole thing is pretty much unprecedented, it’s this shocking:

The opinion polls over the last couple of weeks did show a trend towards Brexit, but y’know, they’re just opinion.  And anyway, what’s real is the fact that for a lot of people on Facebook, the real source of surprise came from something like this:

How could X happen, everyone I know thinks Y. Like me.

Yesterday, when I looked at my Facebook feed, I got the impression that remain is heading for an overwhelming victory. Scrolling unscientifically through the referendum related posts gave me the indication that about 9 out of 10 of my friends were voting remain.  That’s not what the opinion polls were saying, but it would be pretty reassuring.

But in the same way as opinion polls are “just opinion”, Facebook is just narcissism.  Designed to reassure me that I fit in.  What I get to see is just a sample of what’s going on in the world around me that’s been tailored to reflect the broad opinions of my social groups.

I had a look through my wife’s newsfeed, (WITH HER PERMISSION), and it was a bit different to mine.  Pretty much the opposite in fact.  About 8/10 of the referendum updates she saw were more Brexit leaning than remain.

We have a lot in common.  Similar tastes in movies, broadly similar tastes in music (except Maroon 5, who are sh!t).  We even have a big overlap of mutual friends.  So you’d think that we’d see a similar slant on politics.  But we don’t.

Facebook’s algorithms tend towards reinforcing certain themes within a social group.  As a result, it becomes an echo chamber.  The more you see of something, the more you see of the same thing.   Because of where I’ve lived, studied and worked, I seem to have a lot of Facebook friends who are generally:

That pretty much describes the core audience of the remain campaign.  I might not fit into that group myself, but because the vast majority of my social connections look like that, EdgeRank assumes that I am interested in the same things.

This is fine for reinforcing interpersonal relationships and identifying the people who you are want to see more of, but it also creates the impression for people that their opinions are more widely held than in reality.  In effect, Facebook implements a form of Groupthink across audiences.

Preaching to the Converted

When you share content through Facebook, it’s going to go to people who are most likely to be interested in it based on their relationship with you.  That’s good when it comes to a snapshot of your steak, or a picture of Dog Vader: 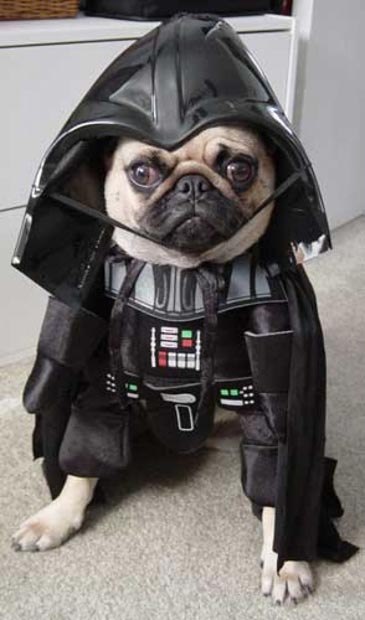 But it means that the carefully crafted piece of propaganda that will absolutely, definitely convert the undecided to your political view point only gets seen by people who already agree with it.

The unintended consequence of this when it comes to major issues is that certain groups will become more complacent about outcomes.

A Piece of Advice

Given what I know about the people I’m connected to – and by extension the people who are reading this, you’re probably a bit sore at the moment.  Sh!t’s gone wrong, but it will get better.  In a couple of years, when we get through the EU negotiations, we’ll probably be in much the same situation with trade deals and freedom of travel as we are today.

If you want to change people’s minds, sharing a meme on Facebook ain’t the way to do it.  If you want to convert people to an ideology, you’ve got to find people who need converting.  Not one person came and knocked on my door to inform me about the referendum (to be fair, I’d have told them to “f*ck off”).  All people did was to share their lists and articles with me, and to be honest, when the only things that you’ve got to read are the same thing, it’s best to reach for a book instead.

Anyway.  If you’re feeling a bit crappy after the referendum outcome, you have my permission to go outside and take a walk.  Find a tree to sit under or something pretty to look at, and remember that the UK is still a fantastic place to be, and that everything will be OK.

One reply on “Here’s Why #Brexit Came as a Surprise”