I’m turning into the bus stop of blogs.

You wait ages for a new post, and then two come along at once.

Following on from the post about the filter bubble of social media that I put up the other day, I thought it might be useful to look at some of the finger pointing.

This is a chart that’s been posted quite a bit, using some stats from YouGov about voting intention for different age groups:

The remain/leave totals don’t add up to 100% – that’s because the table ignores the undecideds for each age group, as this was based on voting intention rather than actual votes.

Let’s have a look at a different stat:  The number of people in each of these age groups: 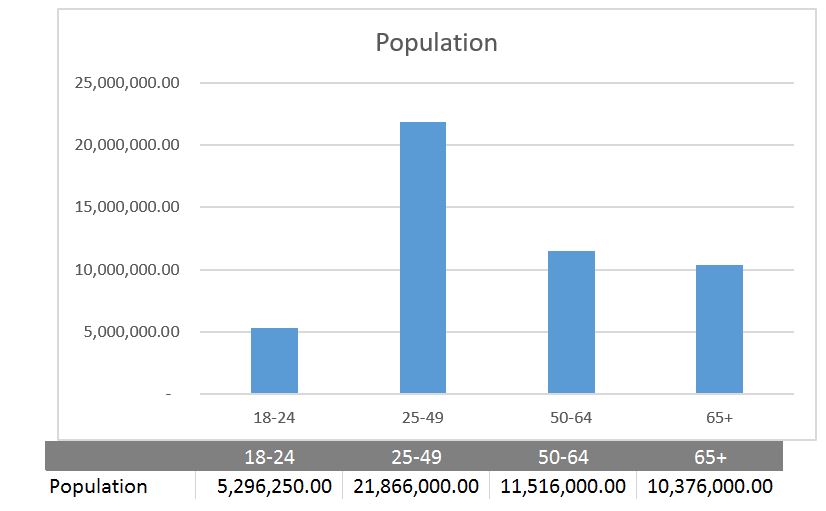 From this we see that the 18-24 age group are by far the smallest in this.  Hardly surprising – this group spans 5 years, whereas the largest age group (still broadly pro-remain) is the 25-49 age group, which is 4x the size.

The older age groups (both pro-brexit) add up to about the same number as the 24-49 age group.

Using the % opinions in the original table from YouGov, and applying it to the numbers of people above, we get the following:

Based on this data, remain still lose, but the overall margin of victory is quite a bit smaller than we saw on the night – about 780K.  The number of people that were still undecided is about 9x this number – easily enough to have swayed the vote one way or the other.

The actual vote in the election was a bit lower than this:

The turnout on the night was about 72%.  Very high for a UK election of any kind, but still, more than a quarter of those eligible to vote didn’t bother.  For whatever reason.

Here’s how that translates into votes:

In this table, leave still wins, and by about the same margin as we saw on the night – although the numbers are a bit smaller.  The margin of victory was 1.8 Million- or about half of the number of people in the 18-24 age group who didn’t bother to vote.

If this age group had shown the same commitment to voting as the 50-64 age group (77% turnout), there would have been roughly 1 million more votes for remain than there were on the night.

In the last post I wrote, I finished by saying that the filter bias we have in Facebook tends to fool us into thinking that a specific opinion is more widely held than it is, and that campaigning actively in the community would be a more effective way of changing opinions than simply posting memes on Facebook.

If you want to elicit real change in the world, you need to get off your entitled arse, and drag yourself down to the polling booth.  There’s a quote that comes to mind:

Democracy is a device that ensures we shall be governed no better than we deserve.

As I said above, there’s a rather poisonous meme doing the rounds that older people are screwing the youth because they’ve voted out.

More accurately, the youth have screwed themselves by not voting at all.