Google’s been a lot more aggressive in going after spam over the past couple of years.  Aside from the headline updates like Penguin and Panda, there’s also been a few high profile penalisations handed out – most recently Rap Genius got a brief kicking for some obvious spamming.

The one area that Google (and by Google, I mean Matt Cutts) seem to have had a particular gloat about is link networks.  Quite a few of these have been kicked over in the past 12 months.  Usually with a little one of these to mark the occasion:

"There are absolutely NO footprints linking the websites together" Oh, Anglo Rank.

To be honest, I’m reasonably indifferent to link networks.  They’re not for me, because I tend to get involved in projects to promote brands who want to retain a single domain rather than taking a churn and burn approach to SEO, but if you’re working at the greyer end of the market, then they probably come in useful for the short term.

However, they’re not a long term solution, and no matter how careful the owners are with trying to remove any footprint, there’s always one.  In most cases, it’s the websites that they link to and the co-citations that arise within the network.

Typically an SEO will build links to build authority for a website.  One of the techniques that’s grown in the past couple of years has been co-citation whereby you include links to high authority competitors in the same page as the links to your own site.  The thinking behind this is pretty sound.  If a web page lists 5 of the top sites n a niche alongside yours, then the assumption is that your website is associated with them in the minds of the writer.  This is, “A Good Thing” and it happens naturally on the web where people make “best of” lists, or offer advice in forums.

I’m going to skip over the ethical debate about whether “Company A” should be placing links to “Company B’s” website without their permission and potentially putting their visibility at risk of a penalty.

Over time, these positive associations work should confer authority.

If you’re in the market for a lot of links, a network seems like a good idea.  You get a lot of links fairly quickly, and with minimal effort being expended.  Owners of networks are typically pretty cagey about how many sites they own, but typically talk in the thousands of websites.

Owning a network of links isn’t all that cheap.  Typically you need to buy a bunch of expired domains which already have some authority in Google, and you’d do it across a range of different subjects.  Even at £10 per domain, you’re looking at £10K to buy a thousand domains.

You’d almost certainly want to use something like WordPress for content management, although you’d modify it to allow for easier management of multiple websites without having to log in.   That’s either a development cost for something custom, or an off the shelf solution.  Few hundred quid.

Then it’s time to sort out the hosting.  You don’t want to bung all the sites on the same server, because then they’ll all be on a single IP address, and that’s pretty obvious.  You don’t necessarily need a dedicated IP address for everything, but you’ll need a lot.  Let’s be conservative and say that you just go for 100 multi website hosting packages.  You’d want to stick your sites in a major company’s data centre, because having them on bigger shared servers will help to mask what you’re doing.  You could use someone like GoDaddy and get a £3.99 per month package which allows unlimited websites.  Let’s take 100 of those.  £399 per month. £4788 for a year.

Anglo Rank, the network that Matt Cutts and his team busted in early December had a fairly comprehensive price list, and also provided some details about how they placed links.

Based on our numbers above, the network owners need to sell about 1100 links to break even.  Ideally they’d want to make a bit of a profit though, so lets say that they want to sell around 2250 links per month – 15 packages.

This wouldn’t completely fill up their inventory of course, if they only had 1000 sites, their total inventory would be 10,000 links – or 40 of the larger packages.  Anglo Rank limited the number of packages that they were selling to 100 – which suggests that their network was bigger than 1000 websites, but probably not an order of magnitude bigger.  Maybe 5000 websites, maybe a little less.

And therein lies the problem.

The Anglo Rank Network was a blind buy and links were placed randomly so you didn’t know where your links would appear.  Also, you didn’t (don’t) get a link report “for obvious reasons”.  Of course, as a customer, you want to know that you’re getting what you’ve paid for, so you’ll check where your new links are using Majestic SEO, Ahrefs, or Open Site Explorer.

And this is the problem.

Pretty quickly I’ll be able to spot the patterns of which websites are commonly linked from the same pages.  Here’s a simplified example: 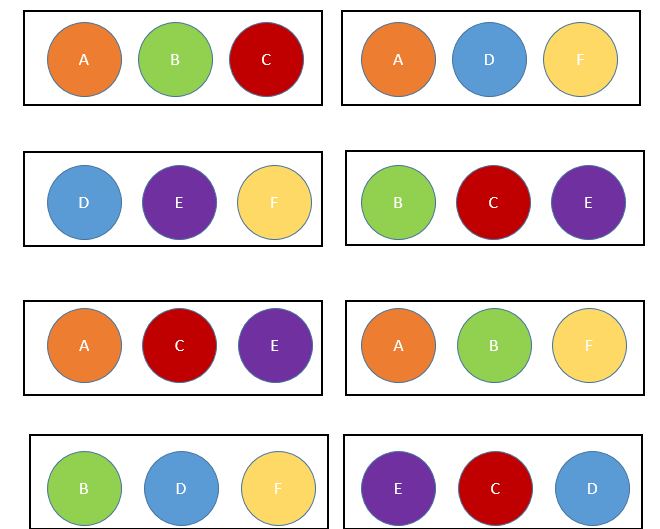 Actually they do work.  For a time.

Google can’t crack the network until there is sufficient information about the relationship between the sites.  The longevity of the network is probably inversely proportional to its success.  If you get in at the start of the network, you’ll get some value from it, but my gut feeling is that by the time it starts getting advertised in the black hat forums, it’s pretty much a spent force, and the owners are probably looking to cash out.