Last week the ASA released some clarification on the compliance requirements for disclosure on paid for blogs and social media.  The essence of the briefing for bloggers is that if you’re being paid to write a promotional post about a product or business then you’re required to include disclose that you’re being paid to do so.

Given that a lot of off page SEO is now centred on the idea of blogger outreach and social media promotion, this should have pretty big implications for how campaigns need to be approached, but before we talk about that, it’s worth recapping on why this requirement is in place.

When I enter into a transaction with a business to buy something, then I have a right as a consumer to get what I paid for.  Similarly, the company I’m buying from needs to be protected from false expectations as these could have long term repercussions.

As an example, if I buy a car that’s falsely advertised as having air bags and anti lock brakes, and then I’m involved in an accident where the outcome would have been affected by these inclusions, then I’d have a pretty good case against the business – and they’d have the risk of those claims against them.

Some types of false advertising are kind of endemic as in this example put together by Damian Davila of IDAConcepts:

In the long term, false advertising is really bad for business – it undermines any amount of trust that a consumer has in the products and brand.  After all, if I don’t get what I paid for, then I’m pretty unlikely to recommend a business to a friend.

Focus on the Benefits

When you’re selling anything, the pitch is generally more successful if you focus on the benefits to the end user.  Adverts are the same.  They typically show you an idealised version of a product or experience and create a desire in the audience to buy it.  But this is done in context. IE:  The audience know that it’s an advert.

Native advertising is a little bit more contentious, but the same rule apply.  We’ve had product placement in movies since movies had audiences.  Sometimes these are pretty subtle inclusions like the rotating coke can in Sigourney Weaver’s fridge in Ghostbusters that ensured users saw both logos during a scene:

There are rules about product placement which require that both disclosure and honesty are present while also recognising that the audience have an awareness of both context and fictional claims – for example, although Bond receives an Aston Martin in a movie, it’s made clear that it’s not a stock model and benefits from modifications.

This brings us onto native advertising online…

There’s quite a lot of scope for what is and isn’t a marketing communication – for ease of use, these are all laid out in the CAP Code, but essentially, it boils down to the idea that:

If you’re paying to get awareness, then you’re advertising

k. An advertorial is an advertisement feature, announcement or promotion, the content of which is controlled by the marketer, not the publisher, that is disseminated in exchange for a payment or other reciprocal arrangement

The definition is media agnostic: it doesn’t matter what vehicle you’re using – twitter, blogs, YouTube, local newspaper websites – what matters is that the content is “controlled“.

Control in this context isn’t a vague concept.  It means that the publisher doesn’t have final say.  Guest posts are controlled by the advertiser because they’re written on behalf of them – If I write a post for your blog to promote my business (or client), it’s marketing communication and needs disclosure.

Promotional posts by the publisher of a blog can be considered controlled by the advertiser if guidelines for writing have been set, or if sign off is required.

Ultimately, if you’re publishing adverts on behalf of a brand, then you’re bound by the Advertising Standards Agency code of practice, and you need to disclose that something’s an advert to avoid misleading customers.

It’s no secret that Google played a big part in drafting the new guidelines for disclosure and the definitions of marketing communications that were put together in 2012.  Matt Cutts wrote about pernicious paid posts that lack disclosure back in 2007.  The case he used was emotive, but it emphasised the importance of honesty and disclosure.

With my SEO hat on, disclosure looks like a bad thing.  I’m essentially paying for a link, and then undermining the value totally by labelling it as paid for.  Google’s probably not going to count the link in their ranking calculations, so I’m paying for nothing apart from the awareness and exposure.

Awareness and Exposure are obviously good things.  But they’re typically not a KPI that a pure SEO campaign is being judged on.  I’ve heard the following sentiment expressed within the SEO community:

Fuck disclosure. I’m not doing Google’s job for them.

This seems kind of seductive to an outlaw mentality – after all, that’s what SEO should be:  We’re here to identify and exploit loopholes to benefit our clients; but ultimately it’s a fairly unwise stance to take.

As an industry, online marketing is self policing, largely because people tend to have an interest in complying with regulations and guidelines on behalf of their clients.  The ASA isn’t a government body and they don’t really have the power to apply financial  punishments.   You’re not going to get a fine for missing a disclosure message off a paid for blog post.  However, what you do risk is the appearance of an advert like this above the results pages for searches for your brand:

From a branding perspective, this is pretty damaging, and not something that you’ll want to have to explain in a client meeting.

Given the clear directions about disclosure, you’d think that there are some pretty clear loopholes to avoid them, and avoid the need for disclosure.  And there are.

If you don’t control the content of a post, and it’s written totally at the editorial discretion of a blogger, there’s no need to disclose that it’s advertising.  Look at any “reputable” gadget blog, and you’ll see a swathe of posts about gadgets that have been supplied to the blogger for free and yet there’s no disclosure present on the posts.  Integrity is both assumed and valued by the reader, and protected by the publisher.  If they start taking back handers to publish a positive review, then they lose the integrity of their blog, and with that, the authority that they’ve built up.

Google got a lot of criticism for their stance on penalising incentive based blogging when apparently promoting the same tactic in their satchels advert for Chrome.  We see Julie Deane searching for fashion bloggers and then sending this as an email: 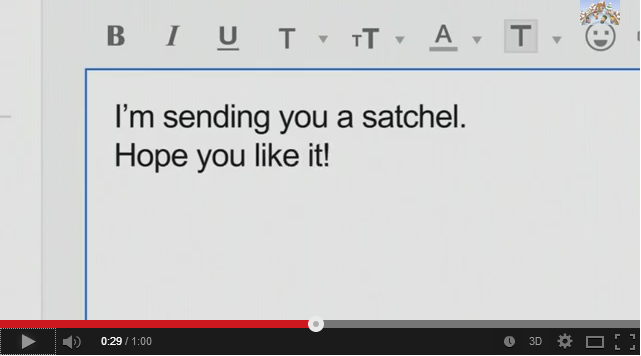 A review based on this probably doesn’t constitute advertising – there is no control implied in the invitation – no requirement regarding sentiment, and no request to link.  It’s been left entirely at the discretion of the publisher.

This is fine if you’re the originator of a product.  If you’re Apple or The Cambridge Satchel Company, you’ve got product to shift, and it doesn’t matter so much whether you sell it direct or whether someone buys it from John Lewis.  However, if you’re a retailer, or services company that competes with other similar companies to shift the same list of products, then it’s more difficult. If I own a shop and send a free iPad to a blogger I’d much prefer that they mention me in the post rather than an alternative supplier.

So what can I do?

If I’m a retailer, I should probably concentrate on what differentiates me from the competition – my amazing service, or streamlined checkout process.  I could send a voucher and invite the blogger to writer about their experience of buying from me.  I invite them to buy, and experience my X-Factor for themselves, but I don’t tell them what to write or whether to link.  Then it’s not marketing communication, it’s an honest review.

Perhaps I’m a bank and I want a reviewer to experience how much better my voice recognition software is for handling enquiries is.  Or a garage who wants to demonstrate how my team can do an MOT quicker than a Formula 1 team pitstop and at half the price.

As a business, I want to differentiate my service from my competitors, and that’s what I need to focus any reviews on.  Inviting people to review the elements I have control over in an honest way means that I can still perform blogger outreach without a requirement for disclosure.

What’s important to remember is that sometimes, getting a post on a popular website has benefits beyond the link.  If I can negotiate a promotional placement on a website with a million visitors each day and it’s going to mean an increase in interest in my business, then I’ll probably swallow the disclosure pill.

But I’ll make damn certain that I track the impact of the post in terms of traffic uplift for the website, and claim those visits as a direct benefit of my SEO campaign.