See those barely visible lines at the bottom of the chart. That’s where “content marketing” and “inbound marketing” are in relation too SEO.  Link Building’s down there too, but that’s our dirty little secret isn’t it.  We don’t talk about that, even to our clients.

So, why the navel gazing guys?  Why are we as an industry so convinced that SEO’s dying?  It’s getting on for a decade since Google’s Florida Update, and the birth of the SEO is Dead Meme.  The chart above suggests that if anything, SEO has never been healthier.  There’s never been so much demand for the assortment of skills that SEO brings to a business.  We should be happy.

But we’re not.  People who’ve been around for a while can see that the raging boner that the world has for SEO is fast becoming flaccid.  At the moment, SEO reminds me of this:

I’ve been a fair few pitch meetings this year where a prospective client has been burned by a previous agency.  I’ve been at way too many conferences where people from within the industry have swerved the description of what they do into something that emphatically doesn’t include the words “Search”, “Engine”, or “Optimsiation”.

In a lot of cases, when you ask a  “content marketer” or “Inbound strategists” what they do, they’ll explain it like this:

And why do you do this? 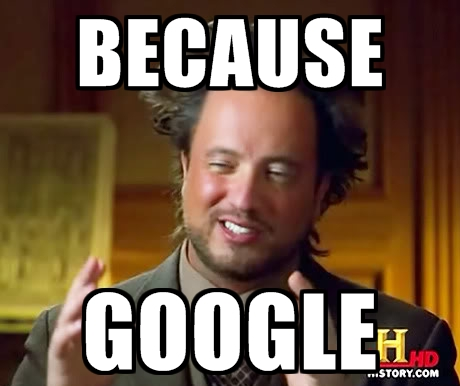 Which makes me say:

Let me roll back my contempt a bit

Oddly enough, real people.  Customers and what not  trust what they see in Google.  A lot of people think that companies rank because they’re “better” than their competitors, or that when they search for “cheap”, a magic computer manages to get the websites in order of price.

No, they’re your fucking customers.

I get to speak to the odd Googler, and when I do, I get the impression that they do care about users.  Googlers feel a certain degree of responsibility to ensure that the people who use their service.  Hence the malware warnings, and the agressive pursuit of spam.  They want websites to rank on merit,  not because of the number of shitty links that they can buy from a team of monkeys dropping comments on blogs.

So the other thing.  SEO’s a convenient acronym, and it’s essentially meaningless.  I for one, don’t remember the last time that I optimised a search engine.  Of course, it’s a fairly familiar TLA, and marketing managers around the world know that they need a bit of it.  But probably not for much longer.

Of course, for every person who develops a really efficient way of giving themselves more time to spend doing things they like, there’s also a person who finds a really sloppy way of doing something that gets results.  Like buying a tonne of crappy links, rather than, y’know, earning them.

SEO isn’t dead.  Yet.  But the only reason it isn’t dead is that people are still asking for it.  People still want some of that Link Juice running down their chin, and still see those number one rankings as the holy land, and like crusaders, they believe that once they have all that sexy number 1 time, all of their transgressions will be forgiven.

This year, pretty much every sales pitch I’ve been in has involved a bit of a chat about how fucked over the company in question was by their last SEO Agency.  How things had gone well for ages, and then they’d been bent over and shafted by Google.  A lot of these online marketing managers were complicit in the apparent “destruction” of their business by signing off on those ever increasing link budgets, and drooling over the ROI that SEO was delivering.  But hey, SEO=Plausible Deniability.

We’re at a tipping point.  A lot of people have been burned.  A lot of businesses have suffered from bad decisions.  That’s nothing new, but now, there’s a scapegoat that’s as convenient as its acronym.

A lot of companies aren’t going to sign off on those big SEO budgets next year.  Or the year after.  Savvy marketing managers are a bit chastened by Penguins and Pandas.  They’re more tuned to the fact that a lot of the short cuts that have worked in the past no longer do.

We’re going to see the cash that was earmarked for “link building” get invested in brand building, and the cash that was spent bastardising content to include specific keywords used to clean up the shitty mess that SEO made of user experience.

Will SEO be dead next year?  No.  But we’ll probably be calling it something very different.  I just hope it doesn’t sound as wank as “Earned Fucking Media”.

One reply on “SEO’s Not Dead Until I Say So”