So there’s this new service, yeah, and what it does is grab loads of keyword variations from the internet and then create a huge number of new pages on your site that are scientifically optimised for user queries.  It gives you an 80% increase in traffic, and it’s so amazing that the company behind it is going to be worth like $10 billion next week.  Not only that, it’s such an exciting company to work for that it’s got people from places like Google, Facebook, and every other tech company worth mentioning queueing up to get a job there.  And did I mention that it’s going to completely destroy the SEO industry over night.  Oh, and the whole conceit is so exciting and convincing that bloggers are falling over themselves to write the most effusive and panting posts about it.

From the breathless excitement of the blatant advertorial post on TechCrunch  about Bloomreach (no link guys, sorry), you’d think that the world of digital marketing was about to change.

I disagree.  And not just because of my job.  I disagree because the whole Bloomreach project smells like a big pile of shit, and I think that people who get sucked into using it are going to be putting their businesses at risk.

If you cut through the buzzword laden arse dribble that that the TechCrunch blogger wrote yesterday, you can summarise Bloomreach like this:

But let’s not be too hasty.  They’ve got some stats to look at:

In a pilot programme for an education company, they drove a 15% increase in conversions, and a 50% increase in advertising profits.  I don’t trust percentage statistics, they tend to cover up the truth, and they tend to get used most when the real numbers aren’t that impressive.  15% of what?

But there are other statistics too.  They’ve also been piloting their programme with 70 big name brands including Orbitz, Crate+Barrel, and Oodle.  They delivered an extra 25 million visits per quarter across those websites.  Exciting stuff.  That’s 100 million extra visits per year.  Visits are great if they convert, but there’s no information about that.  The revenue uplift that the post talks about is $143 million in 2012.  That’s across all of the new clients they hope to sign up off the back of the TechCrunch advert, not the clients they’ve already been running with in stealth.  I’m going to be charitable and suggest that they’ll pick up another 630 clients worldwide to increase the size of their network by an order of magnitude.  If they deliver a similar amount of growth, in page volumes, that’s a billion visits this year.  That means their average eCPC will be $0.14.

Except it won’t, because despite the adulation that’s been heaped on Bloomreach, it’s not the messiah.  It’s not giving away this amazing traffic, it’s charging for it.  They’ve had $15 million in funding so far, and they need to make that back.

Also, it won’t work, because it’s fundamentally flawed as a concept.

When the genii and gurus came up with the idea of dynamically creating vast numbers of doorway pages to make content more relevant to search engines in 2009/10, they probably had one eye on the gigantic success of the various Demand Media websites.  Making their investment case to their backers was probably a piece of piss given the valuation of $1.5 billion given to Demand Media at IPO.  At launch, their shares cost $21.  Yesterday, they were worth $7.  That’s still $500 million, but it represents a massive loss in value for shareholders over a year.

You can correlate the drops in Demand Media’s share price with the rollout of Google Panda.  Everytime their shitty websites took another knock, so did the valuation of the business.

Panda was all about cutting the low quality made for search pages out of the index to improve user experience.  Bloomreach is all about trying to put them back in.  Google’s guidelines about search quality say:

Doorway pages are typically large sets of poor-quality pages where each page is optimized for a specific keyword or phrase. In many cases, doorway pages are written to rank for a particular phrase and then funnel users to a single destination.

Whether deployed across many domains or established within one domain, doorway pages tend to frustrate users, and are in violation of our Webmaster Guidelines.

The Bloomreach approach to SEO reminds me of the general approach to SEO c2005.  It’s flawed and layered with buckets of fail.  It’s aimed at non-savvy marketers who think that they can take a short cut to success that simply won’t work.  It’s hugely bad for users, and seems to utterly fail to recognise that search marketing is not about dumbing down the internet in the futile pursuit of more clicks, it’s about developing a clear strategy that recognises customer needs and presents them with a persuasive and tailored solution that properly represents a brand and encourages engagement.

I don’t doubt that the Bloomreach team have developed a product that they believe is going to revolutionise the world and put every SEO Guru on the dole, but they haven’t, they’ve developed a massive spam factory that’s based on short term opportunism, and a lack of understanding of what marketing and customer engagement are.  The fact that one of their founders was a staff scientist on the Google Search Quality team seems to be a big selling point for them, suggesting that his inside knowledge of the ranking algorithms will benefit their clients, while also reassuring those clients that what they’re letting themselves in for is without risk.  It isn’t.

Creating millions of crappy doorway pages is a shit idea for any business who wants to have a sustainable presence in search.  It’s specifically mentioned in the Google guidelines, and those new pages are unlikely to have any long term value due to the Panda algo.

Anyway, cheer up, here’s a picture of a dog dressed up as Yoda. 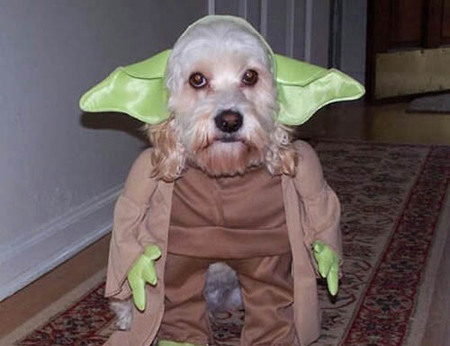