Even if the ridiculous Mayan prophecies are proven to be correct, it means we still have 351 days of the Internet remaining before the world ends, which is plenty of time for lots of things to happen.  My belief is that 2012 will be a pivotal time for online marketers, and that a lot of the technologies and networks that we use will come of age to redefine our approaches to both search marketing and social media.

There’s been socio-political change across the world in 2011, and a lot of this has been facilitated by online conversation.  From the uprisings of the Arab Spring to the London Riots and the Occupy protests, we’ve seen people leverage social channels to organise and bypass traditional methods of communication.  This will continue, and it scares people.

There’s an awful lot of censorship of social media across the globe, and this is going to grow.  I think that in 2012, we’ll see “democratic” governments like the US and UK use bills like SOPA to curtail social communication by the back door.

It will not work.  There are now more Facebook users in the US than people who voted for Obama in 2008.  That’s a big challenge to the authority of a government, but it is also protection against draconian measures being proposed.  An increasingly out of touch legislature will lose credibility if they are protecting free speech by curtailing the freedom to communicate, and people will rally against it.

If you think that the outcry from the SEO industry was loud over the decision of Google to withhold keyword referrer data, the introduction of the European Cookie Directive in May is going to sound like a nuclear bomb going off.

Websites that do not comply with the cookie directive and get explicit consent to place tracking cookies on user machines will be fined.  Those that do add the consent request to comply with the legislation will find that most people opt not to take the cookies.  That’s bad news.  The ICO was one of the first sites to implement a cookie opt in option for users.  As shown in this image, it has a big impact on their ability to track users:

The above image source is BrockVicky on Flickr who obtained the data via an FOI request to the ICO.

Losing around 90% of analytics data is going to cripple a lot of businesses, and also going to make things like Conversion Rate Optimisation incredibly difficult to do.  The bill is misguided and lacks insight into the importance of data to the online marketing industry.  During a time of recession and low economic growth, it seems utterly stupid to enforce it, however the EU are hell bent on imposing the law to the letter, and beyond.  According to the most recent guidelines, the bill covers tracking without consent and is not just limited to cookie placement.  You might get away with using Urchin to measure traffic, but without the cookie tracking, you’re going to lose out on a lot of returning traffic data which will skew the ability to attribute value to traffic.

The bill seems unworkable, but heavy fines being threatened, and a need for businesses to remain compliant with the law means that it will be introduced, and we will have to deal with the consequences.

Google have done a lot with social media already, and over the past year, we’ve seen the launch of Google+.  Despite the furore over the Google Chrome paid linking nonsense over the past couple of days, it hasn’t stopped the growth of in marketshare that Chrome has/  It may still be the 3rd placed browser, but that’s not going to last much longer:

Chrome will probably overtake Firefox into second place this month or next month, and based on current trends, could well overtake IE late this year or early next year.  That’s big news, because one of the great advantages of Chrome is that it makes your settings and apps portable.  That requires a Google account, and it won’t be long before a Google Account comes with Google+ as standard.

Chrome also calls home, a lot, and provides a huge amount of user data back to Google about how you interact with the web.  Assuming that this isn’t crippled by the Cookie Bill, that additional data is going to provide massive amounts of user information to influence search results and suggestions to make them even more personalised.

Better search results for individuals based on their demographic profile and their personal preferences.  That’s a big thing for SEO, because it means that anyone who focuses on using rankings as a sole measure of campaign success is going to have very little to write home about.  It’s a good thing for businesses though, as it means that they should get a better quality of customer.  Obviously, they won’t be able to measure anything about them, but they’ll still get the additional sales.

Well, not all links, obviously.  The fact is that people don’t link in the way they did, and for the SEO community, the link habit is proving pretty hard to shake off.  Google got nailed for their paid links to the Chrome website this week, Beatthatquote got a ban hammer earlier in 2011, as did JC Penney and others.

They got it because the links neither looked, nor were natural.

Building connections is going to be as important in 2012 as it was in 2003, it’s just the type of links that you need that will change.  Social citations will make the difference, but not the kind you buy for £5 per 100 from backstreet link dealers. 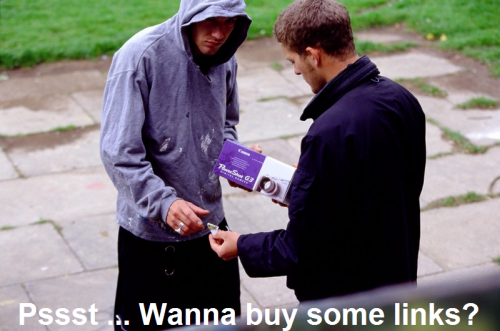 The rise in social media value attributed to search results means that bulk buying social bookmarks will be as ineffective as bulk buying directory submissions.  You’ll need to hunt down people who are demographically relevant, have authoritative profiles, who don’t link out much, and who are influential if you want to get any value out of them.  I’m willing to bet that in 2012 we see the follower:followed ratio become the new PageRank for link sellers.