Every revolution in civilised history, from the Babylonian revolt against the Assyrian Empire through to the ongoing Egyptian riots against Hosni Mubarak has started with oppression.  Revolution, wherever it happens begins with an idea that can be shared and ideals that can organised around.

If fear is the fuel of revolution, communication is the match that lights it.  The hallmark of revolutionary communication is that it is conducted in public but shrouded in secrecy.  It also leverages the best available technology – often more quickly than the less agile governments that it stands to overthrow.  Early Christians in the Roman Empire would carve symbols into walls to guide the initiated to meetings and to identify themselves to people they trusted:

During the era of communist revolution in the early to mid 20th century, the pamphlet was the greatest weapon of the revolutionaries.  Short form communication to share ideas and undermine a state by exposing its corruption or weakness.

Fast forward a few decades, and social media is the new graffiti.  Anonymous accounts accessed through proxy servers are enough to protect individuals from identification and punishment.  Files can be shared via P2P channels across continents, instantly arming millions of people with information.

Meetings can be organised, protests managed, and misinformation spread.  With an effective cost of 0, an organisation can arm its members with everything they need to function independently.

In the information age, revolutionary organisations share structure with the web itself.  Resilience comes from redundancy, through distribution of power across multiple centres, through loose affiliations rather than coherent structure.  A distributed organisation is far more resilient than a distinct hierarchy.  Although it has a higher overall number of points that are susceptible to attack, the nature of the structure means that no one point of weakness exists, and that functionality is maintained under attack.  The Internet was conceived as a multiply redundant communications network to ensure the flow of information under any circumstances.  A modern revolutionary group shares this infrastructure. 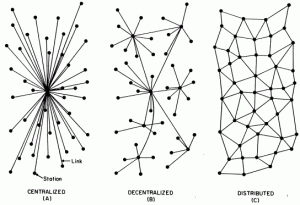 An advantage of social technology like Twitter for revolutionary groups is that it provides a one way blind / simple broadcast infrastructure for information.  A single account can be accessed by multiple users sharing a password, and discarded after a single use.  There is no personal verification, no real need to expose any form of actual identity, and thanks to the constant stream of content on every subject, too much noise to ever pull out a distributed thread of communication without knowing in advance how it will be structured.  With Twitter, you can hide secret communication in plain view.

There are also communications that you don’t want to hide, those of support, the ones that a government like Mubarak’s (or other authoritarians) fear most.  Those of open support for the revolution.  When members of the previously supportive US Government start to switch their allegiances to the new order in a country, the regime is doomed. #egypt has been a trending topic for days, #tunisia was before, and #iranelections was in the public eye for months.  Bullies are often cowards, and when faced with their own ugliness, they will rarely be able to stomach what they see.

When the riots began in Egypt this week, one of the first acts of the Egyptian government was to cut of the Internet.