Do you know why people call themselves gurus?  It’s because they can’t spell charlatan.

The hallmark of a lot of social media campaigns is that they fall under the same lack of scrutiny as an off line branding campaign – the benefits are known to be there, but it is accepted that they are often intangible.  To a certain extent, this is true, however it does not excuse a lack of analysis.

In order to determine the success / failure of any marketing activity, analysis of data is vital.  Even if you don’t set direct ROI goals for social media as a channel, you need to measure it’s impact within the marketing mix.  If you can’t measure something, you shouldn’t do it, because you won’t know if you’re doing it right!

Here’s a DUMB way of ensuring that your social media campaign stays honest.

It is not simply enough to set a goal such as “doing some social”; there needs to be a specific end to the campaign.  When planning what you are going to do, you need to know what success looks like.

As an example, we might want to increase the number of people signing up for a news letter through Twitter.  We have a budget of £100 for the activity, and each new sign up has a lifetime value of £10.  If we want to get an ROI of 10 from the Social Media exercise, we need to acquire 100 new sign ups.  Any more, and the campaign will have over-delivered, any less, and the campaign will not have succeeded.

Having a specific goal is essential, but it is equally important to be able to understand what the goal means – how do you get to that goal, what are the stages that you need to go through in order to achieve success.  Break down the goal into a narrative that includes the decisions that people make at each interaction with you.

In the example above, this might be fairly straightforward. We are planning to use Twitter, and drive traffic to a specific link by using a message.  The standard user journey might look like this:

By knowing each stage in the process, you will be able to measure each stage, and use the data that is collected to refine campaign activity later.

Once you have a goal defined, and understand the path a user will need to follow in order to get to that goal, it becomes important to know what you can measure at each stage, and what tools are available to you in order to get data. 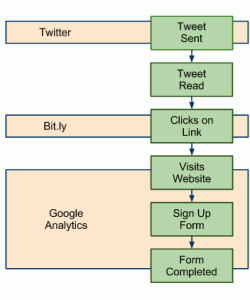 Once we have information about the basic path to conversion, and the way in which we will measure the different touch points along that path, it is possible to identify the metrics that we can use in order to define the funnel:

With a measurable and clearly defined campaign where you have clear insight into response, you have the opportunity to isolate and optimise individual elements of the user journey as you would with any other on line marketing activity.

Individual stages in the process can be measured and tweaked based on the different data that you can collect, maximising the return on investment from every activity, and providing important feedback to make future campaigns more successful.